white shark
You are here: Home / Archives for white shark

Novice spear-fisherman Dean Brougham had just got into the water off the coast of South Australia on November 9, 2009 - when he felt something tugging at his leg. At first the 24-year-old gardener thought it was one of his mates having a laugh as they enjoyed a dip in the ocean under the warm Spring sunshine. But when Mr Brougham turned around he saw what every ocean dweller … END_OF_DOCUMENT_TOKEN_TO_BE_REPLACED

Another tagged New Zealand great white shark has migrated to the Great Barrier Reef off Australia – 1 of nine sharks to be satellite tagged this year. The 3.5 metre shark, nicknamed ‘Thomas,’ was tagged with a popup archival satellite tag. The tag records information on light levels (from which approximate daily latitude and longitude can be estimated) as well as water depth … END_OF_DOCUMENT_TOKEN_TO_BE_REPLACED 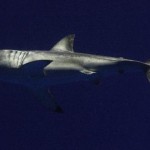 If you were planning to visit the new great white shark on display at Monterey Bay Aquarium, you have missed your opportunity. The staff released the young female white shark today at 1:30, after only 11 days in captivity, because it had eaten only once during that time. She was delivered to the Santa Barbara Channel, tagged and released. “These decisions are always … END_OF_DOCUMENT_TOKEN_TO_BE_REPLACED 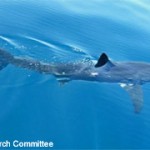 The Shark Research Committee has a new report from a Los Angeles-area man... >Catalina Channel — On July 23, 2008 Bill Davidson was aboard a 42 foot Grand Banks vessel 10 miles off the coast of Long Beach. It was 11 AM the sky was clear and the water calm. Air and water temperatures were recorded at 74 and 69 degrees Fahrenheit respectively. Water visibility was 50 – 60 … END_OF_DOCUMENT_TOKEN_TO_BE_REPLACED 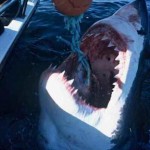 A couple of Northern Santa Barbara County fishermen have reportedly encountered a "big, mean, fish" in the waters east of Point Conception. The female white shark, believed to be approximately 6 meters in length, is said to have approached their fishing boat several times and displayed unusually aggressive behavior. Late spring and early summer are a notorious time of the … END_OF_DOCUMENT_TOKEN_TO_BE_REPLACED