The Telegraph (telegraph.co.uk) has posted an otherwise interesting article with the ludicrous title “Great white sharks look for girlfriends in underwater singles bar, scientists believe,” which insults not only these magnificent beasts but the scientists who dedicate their very existence to the preservation and conservation of ocean life everywhere. 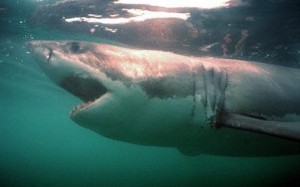 Great white sharks travel huge distances and mysteriously spend up to six months gathered at an isolated spot in the Pacific Ocean between California and Hawaii.

Satellite tagging has revealed that male and female sharks make frequent and repetitive dives together, which may be linked to courtship.

The stretch of ocean the sharks make for – from both California and Mexico – is not a particularly rich feeding ground but it may act as a “singles bar” where they can find a mate.

“There is something going on there but as yet we don’t know,” said marine biologist Professor Ron O’Dor. “Maybe it’s just a good place to pick up girl sharks.”

The shark mystery is one of thousands to emerge from an ambitious attempt to compile the first comprehensive survey of life in the world’s oceans.

The Census of Marine Life is a 10-year project which will summarise everything known about all forms of life in the sea.

Involving more than 2,000 scientists from 82 nations it is due to be published in 2010 forming an online encyclopaedia of all old and new creatures with a web page for every species.

Ian Poiner, chair of the Census’s International Scientific Steering Committee said once completed it will represent a milestone in science.

“After 10 years of new global research and information assembly by thousands of experts the world over, it will synthesize what humankind knows about the oceans, what we don’t know, and what we may never know – a scientific achievement of historic proportions,” he said.

There is likely to be up to 250,000 marine species listed showing numbers, distribution and location with maps indicating hotspots for species and the extent of biodiversity in the oceans

In the latest update of the Census, which will be revealed at a World Conference on Marine Biodiversity in Valencia, Spain this week, scientists will reveal some of their remarkable discoveries in the world’s ocean depths.

:: A ‘new continent’ in the mid-Atlantic where at 1.5 miles deep containing hundreds of rare or unknown species were found.

:: An underwater mountain off the coast of New Zealand -taller than the world’s tallest building – whose summit had been colonised by millions of Brittle Star – a starfish like creature.

:: Sea ice algae in Arctic waters surviving in the coldest conditions of any ocean where brine is more than six times saltier than regular sea water.

:: An estimated 1,000 species found in a 6,000 mile section of the Antarctic Weddell Sea made suddenly accessible by the collapse of the Larsen A and B ice shelves.

:: A large proportion of deep sea octopus species worldwide evolved from a common ancestor that still exists in the Southern Ocean and migrated around the world’s ocean basins 30m years ago using a ‘thermohaline expressway’ – a northbound flow of tasty frigid water with high salt and oxygen content.

Prof O’Dor, a Census co-senior scientist and squid expert, said: “For me one of the most exciting finds was the ridge in mid-Atlantic and where we discovered a whole ecosystem of creatures. We also found swirling eddies formed when two ocean currents meet which are the size of Ireland where ecosystems moved with it. They are so big they can be seen from space.”

Deep-sea explorer Myriam Sibuet of France, vice-chair of the Census, added: “The impressive number of landmark findings over the past two years reveals the richness of what remains to be discovered. The vastness of the ocean and our new research tools keep marine biology forever young.”